With increasing competition comes the question, where and how costs can be saved in the operation process. One possible cost-savings potential lies in the automation process. And even if an automated packing solution is in place, often other individual automated processes can be further optimised to reduce costs even more.

The ever-increasing competition within the food sector presents companies with the challenge of finding the best possible, most efficient, and cost-effective packaging for their products.

Cheese producers know this problem. Due to the special properties of cheese – many cheeses also produce gas in varying quantities within the packaging – the choice of the correct packaging material, its composition as well as the optimal protection it gives the product is crucial to extend its minimal shelf life. In order to be able to make the best possible decision, it is important to gather all the facts in advance.

The wrong film can be costly

A practical example shows what can happen if you do not do this. The choice of the correct packaging film can also be relevant from a financial viewpoint. For one customer of sliced cheese with the request “medium gas barrier”, a film with medium barrier properties (oxygen 168 cm3/m²/day and 80% humidity) was chosen for the packaging. 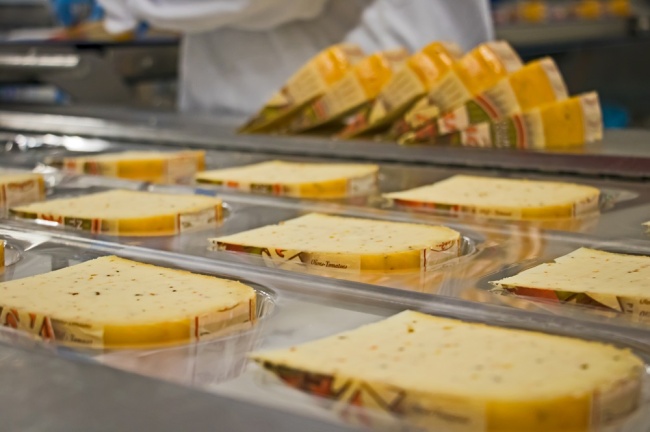 Even if one has already taken these points into account in the decision-making process and has had good experiences over a long period of time, there is often still potential for optimisation. Seemingly small process changes can result in savings of up to 40%.

Already, this has been shown in the example of manual cheese packaging: in the past, cheese was packed into bags by hand. This was relatively difficult, because the bags – for a nicer product presentation – were very carefully chosen. As a result, during the sealing process, the vacuum machine often had to wait on standby. The initial reaction was generally to deploy another person to support this stage. The most cost-effective solution in this case: a bespoke metal sheet was provided by the locksmith as a sliding aid. The square-shaped metal sheet, with ‘wings’ left, right and top, was mounted on the packing table. In this way, the employee was able to pull the bag over the sheet on one side, hold it and push the cheese in from the other side without difficulty and without help. With this modification, the device made packing much easier, doubling the number of cheeses packed.

Although this phenomenon has been known for years, many companies still dread process changes. The arguments against automisation seem to be manifold. The most common reasons why companies oppose this decision are: 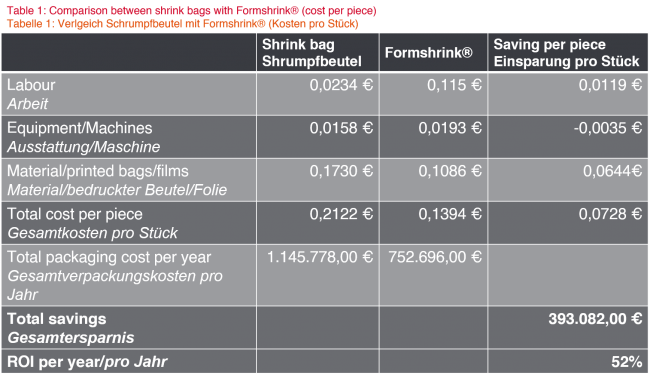 From theory into practice

Many decisions in the business day are based on calculations. It’s only when you delve deeper into the numbers, one sees if and how much savings potential there is. As a rule, the benefits are also greater in larger companies. Nevertheless, the calculations also have to prove themselves in practice, because the best calculation does not help if it only looks good in theory and does not work in everyday production.

A practical and current example of how money can be saved by switching from shrink bags to Formshrink® is shown in table 1. In this specific case, the savings potential after the change was around 34%.

Before the changeover, sliced cheese (3kg for bread) was packed automatically in printed shrink bags. During the optimization, there was a change to Formshrink® from Krehalon. This brought a saving of slightly more than €0.07 per packaged cheese. This may have been due to the investment in a completely new facility. After a preliminary calculation of all costs such as investment, maintenance, machine running time (shifts/capacity), number of leakers, personnel, printing, and packaging material costs were taken into account, it became clear the equipment would pay for itself after just two years. After just one year – half the estimated time – the calculation was proven. The outcome: the calculations from table 1 could be confirmed.

During this project, many basic aspects of the production process were reviewed e.g. whether there is an advantage in the pre or post process whether the cheese is packed lengthwise or width-wise. Also, it has been identified that the new technology has almost doubled the performance per hour. In this context, the question also arose as to how one can best use the now free production time, for example with new products or additional customers. If this was also factored into the calculation, the unit cost per packaged cheese would reduce further.

In the context of global warming, we are all striving to consume as little material as possible. The choice of the correct technology has a huge influence on the amount of material consumed. The differences are significant. With a 400g piece Emmental cheese, the standard tube-bag-packaging has a weight of 4g. By switching to a shrink bag, the weight reduces to 2.5g – that is already a saving of 1.5g. If, instead of a shrink bag, you switch to a tube bag with shrink (Flovac™) or Formshrink®, the material consumption can be significantly reduced even further. The numbers of this in practice are shown in table 2. These show that the calculations can be transferred to other cheese sizes.

In conclusion, even if the cost for shrink films are significantly higher compared to standard packaging films, these should not be automatically dismissed. Because, if one looks at the overall process, including investment, a cost reduction can still result in a significantly lower cost due to the significantly higher performance. Furthermore, up to 27% plastic can be saved by changing from a shrink bag to Formshrink® (table 2). By changing from PA/PE to Formshrink®, up to 80% material savings are possible. In addition, the stability of the packaging and the sales presentation can be improved in this way. Individual packaging considerations can definitely pay off. By just tweaking an adjustment, can often pay dividends offering high savings potential, which means that even supposedly small adjustments have a large impact.

[This article was published in German on 22 April 2021, in the Deutsche Molkereizeitung].

On 3 May, 2022, Krehalon headquarters in Deventer was proud to receive the ISCC+ certification, which is becoming the globally recognized standard for the recovery of waste and residues that provide the feedstocks for circular plastics.

Is packaging the enemy?